Community Homes Resident of the Month Shirley Roach defined by a lifestyle of helping others. 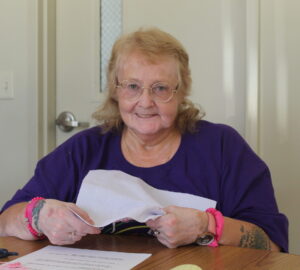 It took Willow Terrace resident Shirley Roach a while to figure out why it took her some time to feel “settled” into apartment-living at Willow Terrace. She was happy with the apartment, the neighbors and community members were nice, and she was very happy with the Community Homes staff, including Cottie, Bonnie and Jeff. A back injury and the need to avoid stairs provided a motivation to move to Willow Terrace 6 ½-years ago. Living in a building with elevator access was a solution to her needs. “Something was missing, and the reason finally dawned on me when fellow resident Charlie Lucabaugh decided to slow down. Charlie had volunteered to organize the morning coffee club at Willow Terrace, and he oversaw the laundromat on the 11th floor. He was ready to slow down.

Shirley volunteered to take over Charlie’s duties, and instantly she felt love and contentment for her life at Willow Terrace. The reason is, that she desires to help others which provides fulfillment in her own life. Her “uneasiness” had nothing to do with her living environment and everything to do with her sense of responsibility. That is just the way Shirley is. “I was happy to help Charlie, a wonderful man. He was like a father-figure to many of the residents,” Shirley notes, “I can also state, with great confidence, that I love living at Willow Terrace.

Her sense of helping others does not stop there; she has a passion for sewing and is a volunteer seamstress for others in need. Plus, she does cross-stitch for friends, a skill her grandmother taught her. Shirley capitalizes on her hairdresser training to cut hair for Willow Terrace neighbors. And as if this is not enough, she totes a shopping cart on a bus, and goes to Walmart to pick up “stuff” for her neighbors. She sums it up by saying “It is not what I do; it is what others do for me that gives my life purpose.”

Shirley Roach was raised in a large family where helping others was a way of life.

She is one of six children (two boys and four girls), Her mother Myrtle, (Shirley recently rescued a cat and named it after her mother) raised the children, plus found time to work as a maid, and studied and became a Civil War guide. Shirley’s father, Scott, worked for Hershey Corporation and forged a successful career leveraging skills as a carpenter and a homebuilder. When asked about having six children, Scott would jokingly remark, “We had them before we knew what was causing it.”

Shirley graduated from Palmyra High School in 1969, then trained for a year at Empire Beauty School. She pursued a talent for baking and worked 16 years on the night shift in the Weis Bakery Department. A back injury caused her to leave her bakery career, followed by many years on disability, which she did not like because she could not help others.

She has been married twice. The first, 11 years with Wayne Shearer, who she met at the Campbelltown Carnival.  They had four children, Wade, Paul, Katherine, and Maggie.  Wade once distinguished himself, as an advocate for male breast cancer as he was a survivor.  He appeared on the national TV ABC News to talk about his survivorship.

Her second marriage to George Betz, was also 11 years and he passed away in 2018.

When asked what makes her proud, Shirley cited “the love of mending and sewing which gives me joy and a chance to do something nice for others.”

And Community Homes finds it nice to recognize Shirley Roach as our August. 2021 Resident of the Month.