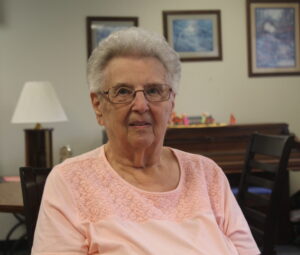 Happily at home at Maple Terrace

Jane Reichard’s life journey spans almost 88 years. She is the first to admit that the last two have been very happy.

“That’s when I moved into Maple Terrace. I love my apartment. The neighbors are very friendly and the Charlotte and the other staff, have gone out of their way to make me feel at home. It is a great situation for me at this time of my life.”

“It’s interesting that I had concerns because of the unknown of changing my lifestyle from living at home to living in an apartment community. Once the decision was made, I had to ask, why didn’t I do this sooner?”

“Losing my husband was a very difficult period for me, but I am thankful to have had the support of my family and friends. I am ok now,” Jane says.

Jane and Ronald both had careers in this area. Jane worked for many years at the Lustberg-Nast Shirt Factory at 6th and Guilford Streets in Lebanon, primarily as a “labeler”.

Ronald was in the Navy from 1951-1954. He served in Mediterranean and Cuba during this period. He was 18 when he enlisted.

After discharge, Ronald worked first at the Highway Department, then for 45 years at Quaker Alloy in Myerstown.  He was a “Melter” on a big furnace. Ronald also held down a second job as a janitor at the Zion Lutheran Church in Lebanon. “Ronald loved the church,” Jane remembers. “He was a wonderful husband and father,” Jane said,” despite devoting so much of his time working, he always found time for the children and me.”

They had a large home on East Main Street in Myerstown where the children were raised. Son David lives there now and acts as caretaker. Jane temporarily moved in with son Timothy and his family. The idea of having her own apartment led to an application for Community Homes. “I hoped to find a place at Tulpehocken Terrace, since we had lived in Myerstown for so many years. But there was a long waiting list. Then I was contacted about the apartment at Maple Terrace. And the rest, as they say, is history.”

Jane keeps in touch with family regularly. “The girls call every day, The sons, every once in a while,” she notes with a smile. She also has 12 grandchildren and 13 great grandchildren When asked about what makes her proud, she quickly answered, “My family.” No surprise.

Jane also has two sisters, Anne Zimmerman from Schaefferstown, and Paula, who lives in Florida. They stay in touch regularly.

Life at Maple Terrace is good for Jane. She enjoys reading (Amish series and mysteries are two categories she mentioned), gets together with fellow residents for Bingo, likes to crochet, and hopes to get back to a past favorite – scrapbooking.

Jane is involved with a group of friends called the Busy Bees. They do volunteer work for funeral lunches and a bazaar.

Elizabeth helps her grocery shop at Dutchway in Myerstown. Jane also takes advantage of the availability of Meals on Wheels service for some of her meals.