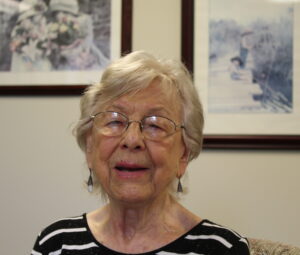 Germany. Brazil. Big City New York. Liselotte (Lilo) Huber has done it all in her 96 years of life.

She can also claim the distinction of living in her comfortable Community Homes Oak Terrace apartment for over 17 years, longer than anyone else in the building.

“I just love my life here,” she says with an ever-present smile, “the apartment is perfect for me.  I have privacy and can socialize when I want to. The building is comfortable, clean, and safe. And the people are so nice. I must single out Charlie Rush. He is a very busy man, but always takes the time to show us he cares about us.”

Lilo is not even remotely like a typical 96-year-old. She is healthy, mentally alert, and independent. She does her own shopping and drives her car to Myerstown every Sunday to attend church with her daughter, Monica Baebler. Monica works part time in the Classified Ad department of a local weekly newspaper. The car is a reliable 20-plus-year-old Chevy. Life is good.

Lilo was born in the small town of Potsdam, Germany, near Berlin. Her parents were Mattias and Helena Blaier. Her working history began at age 10, when she became a “household apprentice” in Obendorf, near Stuttgart.

She met her husband to be in 1943, George Huber. He was a German soldier who was wounded and assigned to work at a Military Base. They married in 1946.

After the war, George started a career as a Brewmeister. His career path took them to Munich Germany, followed by  a job offer that took them to Brazil, and finally reaching their goal in 1959 of relocating to the United States, when George accepted an offer to become a brew master with well-known New York brewery. Rheingold, which laid claim to a whopping 35% of the competitive New York City market.

“We lived in Ridgewood, Queens, which was a predominantly German neighborhood in New York,” she said, “we felt very much at home there.”

A non-brewery career opportunity precipitated a move to Cleona Pa in 1973. The Hubers settled into their own home there.

George Huber passed away in 1976. Eventually Lilo decided that a new place to live would be a good decision. She heard about Community Homes through a friend at Church. She applied, and 17 years ago was offered an apartment in Oak Terrace.

The rest, as they say, “is history”. Lilo continues to enjoy life, including her new celebrity as the Community Homes July Resident of the Month.