American hero. World War II veteran. Survivor of the Battle of the Bulge. 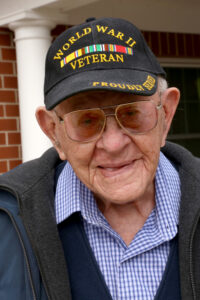 Dale Chapman, an Ohio-born farmer’s son and Army veteran who made Lebanon his home, can now add “centenarian” to that list. He turned 100 years old on April 11.

Growing up
Dale was born, raised, and worked on a farm in Ohio as a young boy. He got his education in a one-room schoolhouse from the same teacher every year (he doesn’t remember the teacher). Formal schooling lasted from first through eighth grade. He doesn’t think he finished.  His help was needed on the farm, and that took priority over his education. His parents, Vern and Eva Chapman,owned the family grain farm. Dale and his brother, Bob, who was one year younger, provided a lot of the labor. The Chapmans grew oats, soy, wheat, and corn. Two mules plowed the fields. When he was 21, Dale had enough of the farm life. He enlisted in the U.S. Army, where he served from 1941 to sometime beyond 1945. He admits now that the war affected him. “My nerves were shot,” he said. This was the explanation in 1945. Today we call it PTSD.

The War Years and the Battle of the Bulge

After training at bases in Louisiana and Indiana, Dale earned his Army military occupational specialty as a truck driver. He was deployed into the war theater in Germany, where he drove needed supplies, like lime, into the front lines time and time again. Then came the fierceness of the Battle of the Bulge, at the Ardennes, Belgium, Luxembourg and Germany. It lasted just one month, Dec. 16, 1944 to Jan. 16, 1945, but the intensity was as high as any battle since the beginning of WWII.

Dale served in Patton’s army. He was one of 80,000 U.S. troops against 200,000 Germans, who knew this was their last desperate attempt to salvage victory in this bitter war. The Americans had just declared victory at Normandy. The casualties were heavy on both sides: 20,876 allied soldiers lost their lives, 42,893 were wounded, and 23,554 were captured or missing. The German losses numbered 15,652 killed, 41,600 wounded, and 27,582 captured or missing. Defeated in the campaign, Germany lost its offensive capability in the west.

By early February, the lines returned to their Dec. 16 location (source: Kennedy Hickman/thoughtco.com/battle-of-the-bulge-2361488). Dale Chapman was one of the survivors. He remembers encountering German snipers hidden in the concrete stations known as “pill boxes,” and having to dodge fire on his truck many times.“I was lucky to be alive at the end,” Dale says.

At the end of his service, Dale and some of his buddies were discharged in Oklahoma. They boarded a train to Pennsylvania as civilians. He traveled by train to Lebanon, where he re-united with his wife Margaret (Stalnecker). Dale was 23 years old when they married, already in the army and awaiting orders to be shipped overseas. Margaret and Dale were originally introduced by Margaret’s sister Gertie, who happened to be roller-skating with Dale. “She figured that her sister was a match for me,” Dale notes with a smile, “She was right. We had a wonderful 50-year marriage, with three daughters together, Wendy, Carol and Nancy.” Nancy has passed, and Wendy and Carol are nearby in Lebanon. Margaret passed in 1993, shortly after their landmark anniversary.

Dale and Margaret’s career moves took them from Lebanon to Ohio, then eventually back to Pennsylvania. Truck driving was Dale’s career constant for a long time. He drove truck for Jonas Donmoyer Trucking for many years. He also held a short-term job driving for Reading Powder Company. The last 25 years before he retired Dale worked for the Lebanon Sewer Department. He filled his spare time doing lawns and odd jobs.

Dale’s home the last five years has been in his Hill Terrace apartment. “I enjoy my life here,” Dale says, “many of the residents are friends.  We all look out for each other. It’s a good life.” When the weather is nice, Dale can often be seen sitting on the front porch of Hill Terrace, socializing with anyone within earshot.

His family had planned a big 100th birthday celebration for him in April,but the party plans had to change with the social distancing cautions for the coronavirus pandemic. As they say, “where there’s a will there’s a way.” The Hill Terrace Community Room was closed, but Dale was brought outside the building to be surprised with a special celebration in his honor. Lebanon Mayor Sherry Capello, visiting on a “wellness check,” presented Dale with a proclamation from the City (at a proper distance of course). A few city staff accompanied the Mayor in a fire truck – and he was saluted for his military service. The city representatives joined friends and family in the parking lot to sing Happy Birthday to this special Lebanon hero. “You only get to be 100 once. It’s a big achievement and a big honor,” his daughter, Wendy, said. “We are all glad to be part of it. Dad deserves the recognition.” 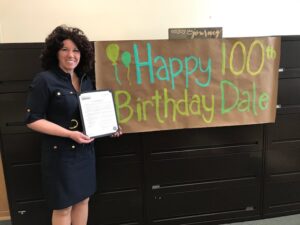